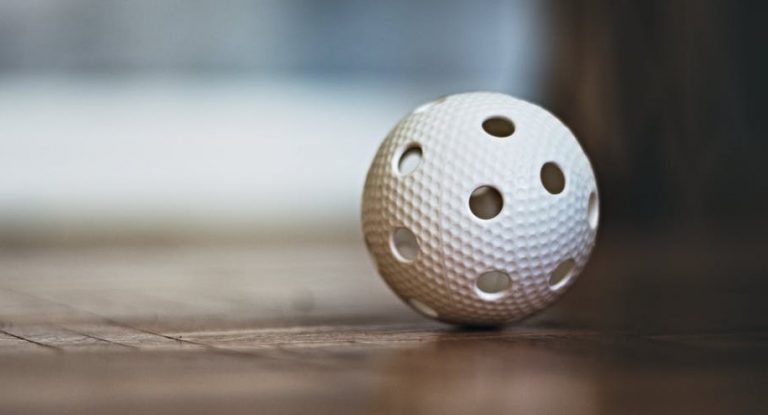 Disclosure: As an Amazon Associate, we earn from qualifying purchases.

In simple terms, Wiffle ball is like baseball but a more simple game that was designed to be played either indoor or outdoor, often the game is played in small or confined spaces. These types of simplified baseball games have been around for a long time in one shape or another, however, Wiffle ball started in 1953 when David Mullany created an easily curable ball for his son who was then 12 years old.

His son and his young friends called a strike a ‘whiff’, hence the ball got the name a Wiffle Ball. A triangular pitch is used to play the game and there are various scoring zones within the game. The pitch size can vary depending on how much space is available to play the game.

From the very start of its creation, the game grew quickly in popularity and has been played everywhere from city streets to backyards and the likes, Wiffle Ball is still as popular today as it was at the start. Since 1980 there has been a World Whiffle Ball Championship held each year.

What Is The Object Of The Game?

Each of the teams tries to score more runs than each other, hence how the game is won. There is also an overriding object which is to be a mini game of baseball that needs little equipment and is able to be played safely in numerous locations.

The Equipment And The Players

Equipment needs are minimal for Wiffle Ball. At least one Wiffle bat is needed (that being said, a broom handle works fine too), as well as a few Wiffle balls (since one may get lost or break while the game is in play).

The range of players is from 2 to 10 players. When there are only 2 players one will act as the hitter and the other as the pitcher. When 10 players are involved, the fielding players are assigned to a zone or role, i.e. double zone, triple zone, pitcher and catcher. Players have to stay in their zone while play is in action.

How Scores Are Worked Out In Wiffle Ball

A home run is counted when a ball is hit past the triple marker without being caught.

Balls that are hit in each area and are not caught count as a single a double, a triple and a home run in the above order. Actual base running does not happen and the batting team needs to keep track of imaginary runners. To the base, a player needs to hit the ball in one of the zones and the ball is not to be caught. All players on base and batter will score the game.

Brian
Hi! I’m Brian, graduated with a Bachelor’s degree in Exercise and Sport Science. I used to be an editor of a sports magazine. I like to read sports and recreation magazines, such as Outdoor Life, Sports Illustrated, ESPN and Runner’s World. I hope that this article can be helpful to you.

Latest posts by Brian (see all)

This site uses Akismet to reduce spam. Learn how your comment data is processed.